A Ray Johnson discussion and (Un)Birthday celebration held as an online Zoom Meeting to honor the artist. Cary Loren hosted the Meeting and John Held Jr., Richard Pieper, and Weslea Sidon joined me, since each of them interviewed Ray Johnson, and their interviews were published in That Was the Answer: Interviews with Ray Johnson, which I edited.

Posted by Julie J. Thomson at 7:52 AM No comments:


While art was at the center of the curriculum at Black Mountain College I offer that nature and experiences outdoor were also part of the curriculum there. When interviewed it was sometimes hard for people to put into words the effect of the landscape on them, however their experience of being outdoors, and the varied ways in which they were exposed to natural materials, can be found in their work. For this presentation I shared examples found in the work of five of the College’s artists: Ray Johnson, Hazel Larsen Archer Jonathan Williams, Stan VanDerBeek, and John Cage.

My talk ended with an invitation to make Mud Pies, after a collaborative reading of John Cage’s and Lois Long’s Mud Book.

My hope is that this discussion, and multisensory experience, offers us opportunities to connect to Black Mountain College through natural experiences.

Book- That Was the Answer: Interviews with Ray Johnson 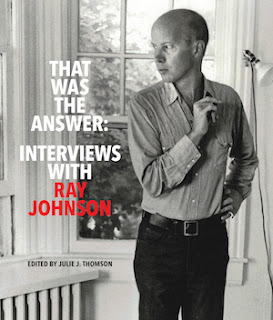 Ray Johnson (1927–1995) was a singular artist, whose life and work were inextricably linked. Born in Detroit, Johnson attended Black Mountain College before moving to New York, where his work anticipated Pop art and he was active in early Fluxus circles. Best known for his collages and Mail art activities, including what became known as the New York Correspondence School, he operated fluidly in a wide range of modes. For Johnson, everything and everyone were potential material for his art—any form could become a space for artistic activity—and the form of the interview proved no exception.

That Was the Answer: Interviews with Ray Johnson brings together a selection of interviews and conversations from 1963 to 1987 that offer unique access to Johnson’s distinctive thinking and working methods. Throughout, Johnson’s responses are marked by his humor and close attention to language. Gathering these interviews for the first time, That Was the Answer serves as an exceptional introduction to Ray Johnson as well as a resource for those who are interested in gaining deeper insight into this artist and his kaleidoscopic body of work.

Posted by Julie J. Thomson at 9:18 AM No comments: 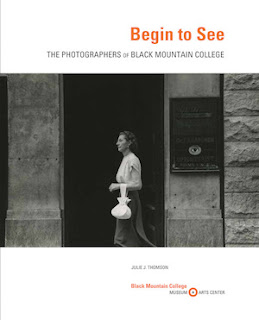 On October 17th at 7 p.m. Durham's Regulator Bookshop is hosting me for a book talk and signing for the exhibition catalog for Begin to See: The Photographers of Black Mountain College.

Julie J. Thomson
I am an independent scholar and curator. I have been researching and writing about the artist Ray Johnson since 2006. I am also interested in photography, Black Mountain College, and artists associated with Fluxus. My writing has appeared in Black Mountain College Studies, the Independent Weekly, Raw Vision, Art Lies, and ...might be good.

I have a M.A. in Art History from the University of Massachusetts Amherst and was a Critical Studies Fellow in the Core Program, Museum of Fine Arts Houston in 2010-2011.